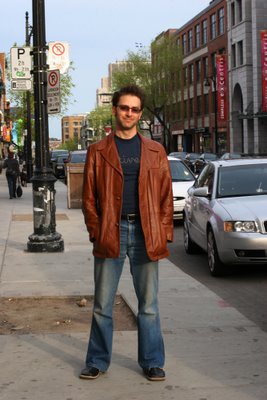 If Chris looks familiar, it's because he was one of my first fashionists. And this I'll admit, Chris is a friend, which is why we were both in Montreal (I was visiting him). I didn't dress him, nor did I ask him to dress up when he met up with me. I just asked if I could take his photo when I saw how put together he looked.

Chris (smartly) wears all his clothes cut slim, so even though he wears a fair bit of vintage, his clothes fit his slim frame very well. It seems a simple rule, but I've noticed that men frequently wear clothes that are too boxy. 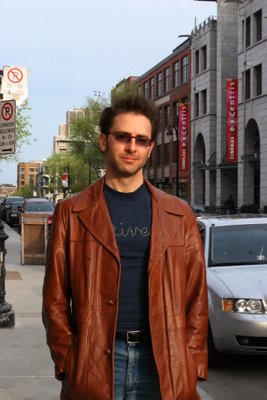 A look at his simple shoes with an interesting bisecting seam. 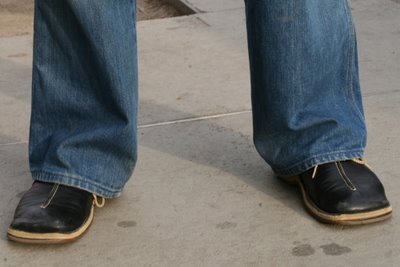 Today's theme is men in leather jackets. Notice how they are all casually dressed, but not in a boring black leather jacket way. Leather jackets look better when they seem as individual as the people who are wearing them.

This is nice and casual without being sloppy.

Huh. I met this guy last week. Nice dude. Thanks for featuring some mens' fashions, which I don't think I've seen on Fashionist before.

@eric, thanks for reading (who knew?), i actually have a label for men's fashion which will bring up relevant men's posts, if you use it in a non-firefox browser (safari or ie) it'll work.